DAVID BROWN - THIS IS BIG! 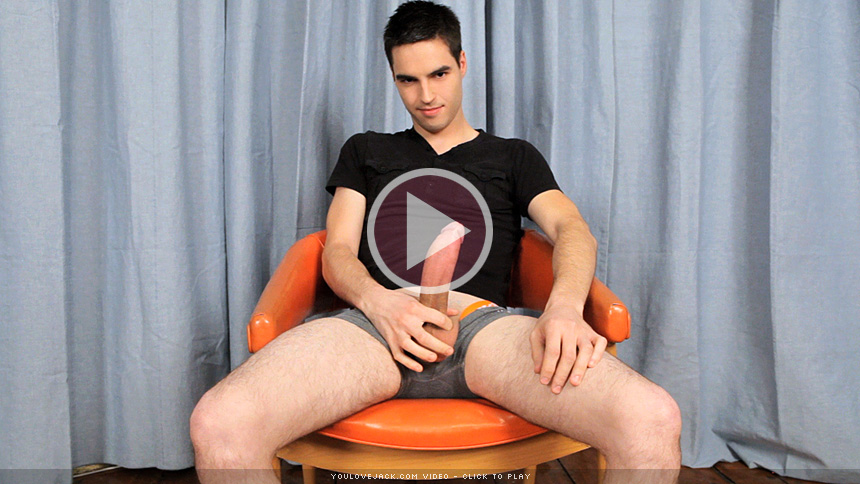 David can't seem to wipe that cocky smirk off his face. One look at his enormous uncut cock and you'll know why... That thing is huge!

This beautiful young man is rubbing his cock through the thick fabric of his blue jeans as the video opens. His cock is fully hard inside his pants and it doesn't take long before he stands up and pushes his pants down around his ankles.

His massive rod is straining to be free against the thin fabric of his underwear and he takes a moment to show off his meaty shaft. So close... but still hidden from view! He gives his cock a couple of strokes then hooks his underwear down under his balls.

Holy crap, that cock is freaking huge. Not just big. Big and thick. And uncut. It's a big, thick, uncut cock!

He holds his massive pecker up and looks at the camera with that shit-eating grin again. Proud as punch that his cock is big enough to hurt! He gives his cock a couple of strokes to keep things moving and the camera comes in for a delicious close-up.

He gives the camera a good long look at his junk before pulling his legs up to reveal his well puckered asshole. Playing with a finger around the rim before poking the tip inside his body. His feet curl and flex as he gets used to being opened up from behind one more time.

His fingers do their job and soon his ass is primed and ready for its next intruder. He reaches for a trusty transparent butt plug and lubes it up as his enormous uncut cock throbs against his belly. He aims the toy at his asshole and drives inside his body with a single thrust and a grunt.

The camera treats us to a close-up of his delicuous mess as it cools on his belly then pans up for his guilty look as he realizes that his actions are captured forever on homemade video. Well done!

All of our homemade gay sex action videos are presented with NO DRM and they'll play on your iPhone so you can enjoy them anytime and anywhere! YouLoveJack rocks!

No DRM
Watch our videos any time you like!